With the IPS system, Volvo Penta has revolutionised the market for traditional inboard installations. Five years after its launch, there are already more than 10,000 IPS units on the market. The IPS program is now being expanded still further. With new and larger drive units coupled to the 13 liter engine, Volvo Penta will launch a further two power classes, IPS1050 and IPS1200, this year. 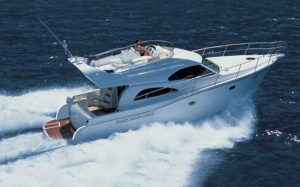 With forward-facing and efficient propellers, the IPS system is the undisputed market leader in pod installations, which has largely replaced the boat industry’s traditional shaft installations.

The first stage of the IPS system was based on Volvo Penta’s 4 and 6-litre diesel engines. Last year, two new power classes were launched with larger drive units based on Volvo’s 11-liter engines.

This year, Volvo Penta is launching a third stage based on the Volvo Group’s 13-litre engines. The two new IPS drive packages generate the equivalent of 1,050 and 1,200 horsepower, respectively, compared with conventional inboard installations. This means that Volvo Penta can now offer the IPS system for boats all the way up to 100+ feet.

Larger engines with higher power output and higher torque make large demands on the drive units. With this in mind, Volvo Penta has developed a larger and even more powerful IPS drive unit as well as a completely new series of propellers for the IPS1050 and IPS1200.

The larger drive unit has all the advantages and features that made the original IPS system so successful.

The underwater body and propellers have been developed with the help of advanced computerised models together with extensive cavitation tunnel tests and tests in boats. The result is a highly efficient integrated system for propulsion.

Their higher efficiency gives the IPS1050 and IPS1200 better performance combined with lower fuel consumption and – not least – lower total emissions. In addition, comfort in IPS boats, compared with boats fitted with a straight shaft, is substantially higher as a result of lower sound and vibrations.

Volvo Penta covers the whole speed range for the IPS1050 and IPS1200, from about 28 to about 40 knots, with seven highly effective propeller packages, which are available as standard products. This translates into significant advantages for both boat builders and end customers.

The engine for the new power classes is Volvo Penta’s 13-liter engine equipped with dual-stage turbo technology, the D13, developing 800 and 900 horsepower, respectively. This 13-liter engine has been developed and designed with the help of ultramodern diesel engine technology.

The D13 is equipped with new dual-stage turbo technology. The first stage is a twin-entry turbo that enables pulse charging – the power in each exhaust pulse is used to provide pulse pressure – which results in a very high torque from low rpm. At higher rpm, a second turbo kicks in so that the engine retains its power even at high rpm.

EMS 2, the new engine control system developed by Volvo Penta, regulates fuel injection 100 times per second. The system controls the unit injectors, one per cylinder, which operate at a pressure of as much as 2000 bar and atomize the fuel for optimum combustion.

Total emissions satisfy by a wide margin the EU RCD and US EPA Tier 2 regulations and are also in line with the very stringent EPA Tier 3 regulations that will come into force in 2012.

The IPS system is offered as a double, triple or quad engine installation. This means that the IPS system covers boats from 35 feet all the way up to more than 100 feet.

There is no difference for the driver whether the boat is powered by two, three or four IPS systems. Acceleration and shifting occur in the same way with twin, single lever, controls. No additional controls are needed.

The IPS units are compact, which means that completely new and bold design solutions for the boats are possible. Onboard space is much larger at the same time as the time needed by the boat builders for installation is reduced by 50% and, in some cases, even more.

Use this form to make an enquiry about this engine: